Eiko Otake at Russell Library: “A Body in a Library”

In September, choreographer and performance artist Eiko Otake performed at Russell Library in Middletown, Connecticut, as part of her series, “A Body in Places.”

“A Body in Places” is a two-year series of dance and movement performances that includes “A Body in Fukushima,” in which Otake danced in the vacant areas surrounding the Fukushima Daiichi Nuclear Power Plant, damaged during the earthquake and tsunami in Japan in 2011, and “A Body in a Station,” first performed at Philadelphia’s 30th Street Amtrak Station in 2014.

Otake performed “A Body in a Library” in February at Olin Memorial Library at Wesleyan University (also in Middletown), where she teaches. Later that spring Otake, interested in performing in the community, contacted Russell Library.

Otake’s performance broke new ground and helped to strengthen the town–gown relationship between the university and the city. In spite of living so near Wesleyan, most of Russell Library’s patrons did not know of Otake or her work. In creating the piece, she wanted to relate to the world of the public library, so staffers were instructed not to interrupt their normal routines. Unlike the Wesleyan performance, which happened late in the evening when the library was mostly empty, her performance at Russell took place on a Tuesday evening, when patrons would be using the computers and reading room and taking out books.

During rehearsals, Otake had various requests for the library’s staff: Could we provide her with books and a book cart? Could the temperature in our Hubbard Room be controlled? Could she use the lobby monitor for the slideshow of Fukushima photos?

Some requests pushed the boundaries of what staff knew or understood about the nature of her performance. Could she scatter books on the floor, as she had at Olin Library? Would it scare or harm the children to see the slideshow in a darkened children’s activity room? How would our regular patrons react to her wandering through the library?

While Otake was planning the performance, she identified the various places to which her body could relate. “It’s good for me to think about something that I can do using my body that brings attention to something that has not been noticed, but I am not an advertising agency or a tour guide,” she says. “I know I am more effective addressing the places where my body can relate to or can juxtapose with or be antagonistic to.”

Silence becoming visible in the library

Otake set up a projector in the children’s activity area with a slideshow of photographs of her in various places in and around Fukushima. The wall on which they were being projected had a giant tree painted in one corner.

“These Fukushima photos in the children’s area could be seen as antagonistic, yet it is also a most unlikely place for them to be,” she says. “I was very aware that it is not a natural fit. But when you bring things together that are not usually brought together, what do we discover?”

Children’s Librarian Kitty Robinson allowed the area to be part of Otake’s performance, saying, “If we as librarians do not take risks, if we are complacent or quiet, we will not exist. We are the people. We have to stop being afraid.”

Patrons had a range of comments after the performance. “It was the strangest thing I ever saw,” said one. Another patron, who visits the main reading room daily, encountered the surprising performance with awe: “It was beautiful. It brought tears to my eyes.” Several people commented, “It was the quietest the library has ever been.”

When I asked Otake about this later, she said, “I do not think the library was more quiet. But because dance is a visual art, you are seeing my body in the background of all possibilities, and the silence became more visible.” 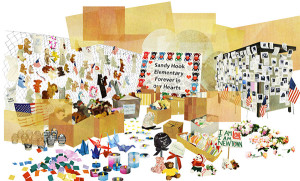 In the Wake of Tragedy 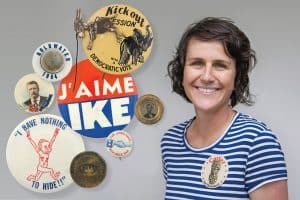