What started as an archive to document Washington, D.C.’s fabled punk music history evolved into wider support of the city’s current music scene, including hosting basement shows—a punk staple—in the library itself. Librarians Michele Casto, Bobbie Dougherty, and Margaret Gilmore of D.C. Public Library (DCPL) explain how this unconventional venture increased visibility not only for the punk archive but also for the library’s other projects.

The D.C. Punk Archive started as a collecting initiative to document the local punk scene of Washington, D.C., home to Dischord Records and 1980s hardcore legends such as Bad Brains and Minor Threat, the political post-punk of Fugazi, and many riot grrrl bands in the 1990s; this independent, DIY approach to music continues. Through community engagement and programming, the archive project has expanded to pursue goals even broader than collection building, positioning the library as a direct supporter of the current local music community.

Outreach and active community involvement were fundamental elements of the project from the beginning. We invited members of the local music community—musicians, collectors, label owners, and filmmakers—to serve as advisors in the early planning stages and connect library staff with potential donors. This resulted in steady donations of collections: fliers, posters, zines, letters, photographs, sound and video recordings, organizational records, and more. In addition to building the D.C. Punk Archive collection, one of the most exciting parts of the project has been engaging the public through programming, most notably the punk shows organized by the D.C. Punk Archive team.

The first Library Basement Show was part of a monthlong series of programs in October 2014 to promote the launch of the D.C. Punk Archive and give project supporters and musicians a way to participate. The show was held in the basement auditorium of the Martin Luther King Jr. Memorial Library, the central library of the DCPL system.

The 45-year-old Mies van der Rohe–designed building has a dim and dive-y basement that would feel just like an underground club if not for the display tables for patrons: Check out a book! Make a button! Stencil a patch! Make a zine! The building is so solidly constructed that no matter how loud the shows get, other library spaces are not disturbed in the least.

The show was so well received it evolved into an ongoing series featuring three local bands every other month, drawing an average of 200 music lovers of all ages. Putting out a call for bands resulted in a flood of interest in playing in the library; in three years, 180 bands applied for spots. When asked why they wanted to play in a public library, responses ranged from “To experience not being shushed in a library for once” to more inspired statements like “Because DIY all-ages shows and literacy are the [two] coolest things ever. Because we are book-loving nerds from the D.C. area whose lives were saved/ruined by punk rock. Because it’s a chance to corrupt children like previous generations of punk bands corrupted us.” Bands are paid by the D.C. Public Library Foundation and treated to dinner by the Friends of MLK Library.

The music is great, the setting is unexpected, and the joy is palpable.

In selecting three bands for each show, we strive to ensure diversity every time, including age, background, musical identity, and the social scene the band will draw. Every show features a noticeable range of who is in the audience and their motivation for attending, and each person leaves with a different idea of what their library can be after such a dynamic experience.

To celebrate the second anniversary of the D.C. Punk Archive in 2016, we collaborated with local record label DZ Tapes to produce a mixtape of basement show bands. Proceeds go to the D.C. Public Library Foundation in support of DCPL’s commitment to promoting local music. The foundation plans to support ongoing shows (at an alternate location as the MLK Library is closing for renovations) as well as future panel discussions, workshops, and skillshares that target the local music community.

One benefit of this emphasis on programming is a raised profile of the archival collections acquired since the outset of the project. The punk collections are in high demand by academic researchers, local high school and middle school students, and fans of D.C. punk. We’ve had visitors from around the world, some coming to conduct research and others who have made the D.C. Punk Archive a must-see stop on their vacation. Another benefit is the impact on donor development—donors are more apt to contribute to a project and an institution that is embedded in the community. Based on the success of the punk archive, DCPL has also reinvigorated its Go-Go Archive collecting efforts.

Several local music archiving projects are under way around the country, but the D.C. Punk Archive project is unique in that there is as much focus on engaging the public as on providing collections access to researchers. A community-oriented approach is fundamental to our mission as a public library. Other public programs hosted by the D.C. Punk Archive team have included author talks, film screenings, music history walking tours, a music photography exhibit, and more. But it’s the basement shows that generate the most enthusiasm—the music is great, the setting is unexpected, and the joy is palpable. 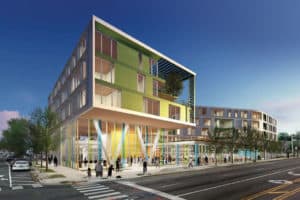