Everyone on the Same Page

When Jamie Comer turned 21, his mother Nancy celebrated—but she also worried. Jamie has Down syndrome, and as Comer knew, it can be difficult for people with developmental disabilities to find intellectual stimulation and a supportive community once they age out of school.

“When people with developmental disabilities become 21, that’s the end of education for them, as if they don’t need to keep learning like other people keep learning as they get older,” says Comer, a trustee of the Port Washington (N.Y.) Public Library (PWPL). She enrolled her son in a local day program but found that “they concentrated on just keeping him busy during the day, basically.” That didn’t sit well with her.

So with the help of PWPL, in 2003 she founded Books for Dessert, a program comprising two book clubs for adults with intellectual disabilities. Each club meets weekly at the library, and each reads everything from novels and nonfiction to poems, short stories, and plays. Past favorites have included Harry Potter and the Sorcerer’s Stone and an adaptation of Romeo and Juliet. Meetings end with dessert and the chance to socialize.

And Jamie? “He’s been in the program since day one,” Comer says. “He’s always been in the Thursday night group, but now goes to the Monday morning book club group as well. If there were another day available, I’m sure he’d want to go to that one, too. He adores reading and talking about the books he’s read.”

Like any other book club, part of the draw of Books for Dessert is the chance for participants to make connections between their own lives and the lives of the characters they read about. When his club recently read the Judy Blume middle-grade novel Blubber, for example, longtime participant Howie Bauer could easily relate to the theme of bullying. “My upstate school, they teased me because I was too slow,” he told the other group members.

It’s not really about learning to read—it’s about reading to learn.Lyna Smith, Next Chapter program manager

Founded in 2002, Next Chapter aims to give people with those disabilities the chance to read, learn, and make friends in a relaxed, community setting such as a public library. “It’s not really about learning to read—it’s about reading to learn,” says Program Manager Lyna Smith. That’s why, at Next Chapter clubs, each participant has the chance to read aloud, regardless of skill level. Each club meets weekly or biweekly for an hour and typically draws four to eight participants and two volunteer facilitators.

With more than 300 clubs in the United States, Australia, Canada, Germany, and Rwanda, Next Chapter offers online and in-person training for organizations and individuals who want to become affiliates.

Skokie (Ill.) Public Library’s (SPL) Let’s Get Together Book Club for adults with intellectual and developmental disabilities started as a Next Chapter Book Club but now runs independently. Dawn Wlezien, SPL accessible library specialist, organizes the club and has seen firsthand how it helps participants gradually grow in confidence. At first, she said, some attendees would just say “pass” when it was their turn to read aloud—but eventually they started participating. “They look forward to it,” she says.

Not all book clubs for people with disabilities focus on intellectual disabilities. In Jefferson City, Missouri, the Wolfner Talking Book and Braille Library (a free service for state residents who are unable to use standard print materials because of a visual or other disability) offers three book clubs via conference call for their patrons, many of whom are homebound.

To participate, patrons call the library to register for the club of their choice—Novel Reads, the fiction group; Big Ideas, which reads nonfiction; or Good Reads, which focuses on fiction and nonfiction with little to no sex, violence, or strong language. They are then mailed the books in Braille, audio, or large-print format. When the club meets, participants call a toll-free number for the group discussion.

“This is [many patrons’] only connection with the outside world, and we take that responsibility very seriously,” says retired Wolfner Library Director Donna Riegel. “I don’t know that public libraries realize how much of a social role they play in people’s lives.” 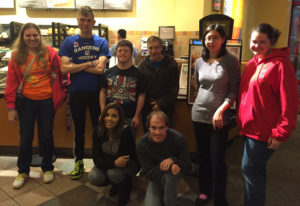 Aging Out of Sensory Storytime