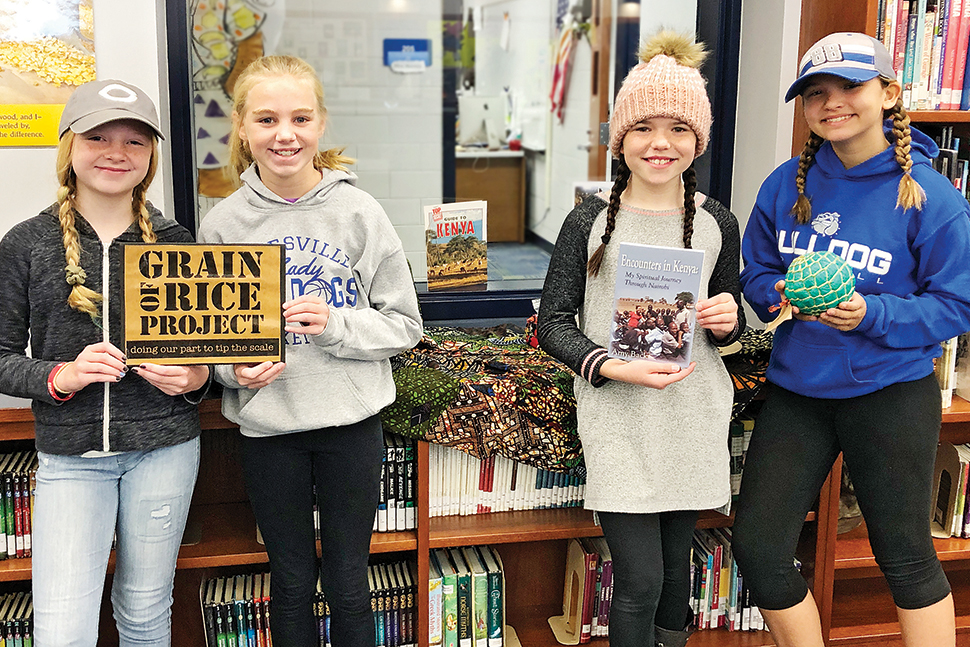 Working Toward a Sustainable World

In 2019, Batesville (Ind.) Intermediate School began a book club using selections inspired by the United Nations (UN) Sustainable Development Goals (SDGs), the organization’s blueprint for addressing global challenges like poverty and climate change by 2030. Batesville’s students use lessons they glean from the club to engage with their community and the world, earning the … END_OF_DOCUMENT_TOKEN_TO_BE_REPLACED 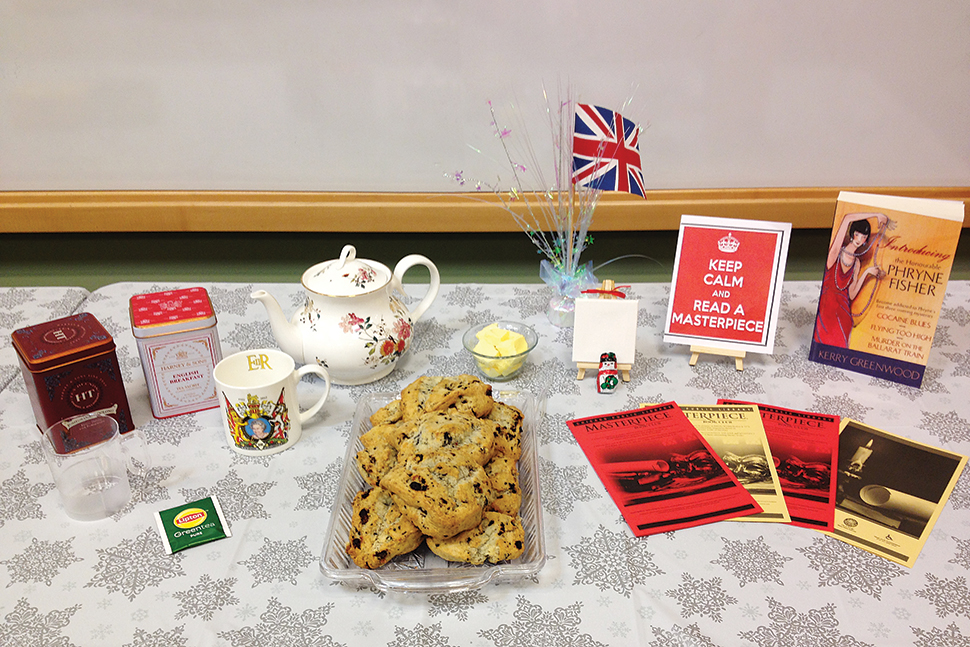 Tales as Old as Time

For every meeting, Czulno would dress up as a character from books the club was reading and shows it was watching. For instance, when the group read the stories of G. K. Chesterton, she wore the black cape, hat, and glasses of Father Brown, the character who lent his name to the Masterpiece show. “It wasn’t just … END_OF_DOCUMENT_TOKEN_TO_BE_REPLACED 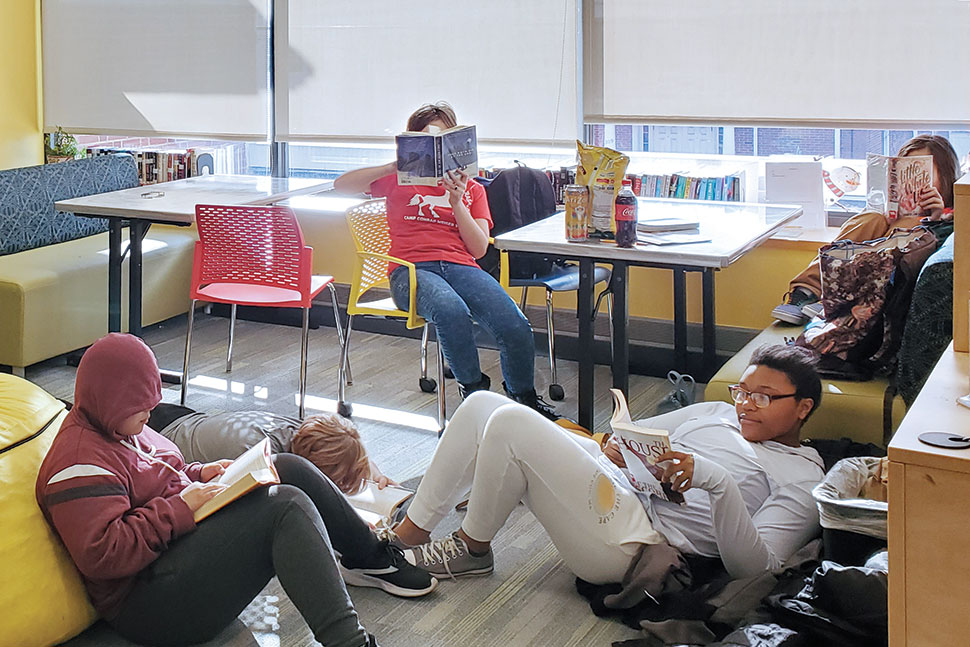 The Sound of Silence

“Our Silent Book Club has been a surprising success—surprising because if someone had told me a year ago that relaxing on comfortable beanbags and reading whatever books we want to read qualifies as an actual program, I would have yeeted that person straight out of the library,” says Wolfskehl, using the popular slang term for … END_OF_DOCUMENT_TOKEN_TO_BE_REPLACED 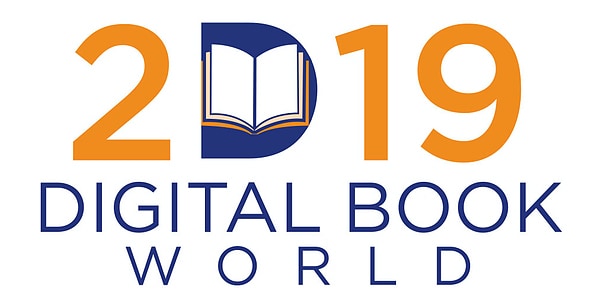 On September 12, Burleigh discussed the robust ebook and audiobook lending ecosystem. Rakuten Overdrive began servicing libraries in 2003, before publishers were fully on board with selling to the market. Fast forward 16 years, and Burleigh said one of the best things libraries do for publishers and authors is to offer discoverability. For every borrower … END_OF_DOCUMENT_TOKEN_TO_BE_REPLACED 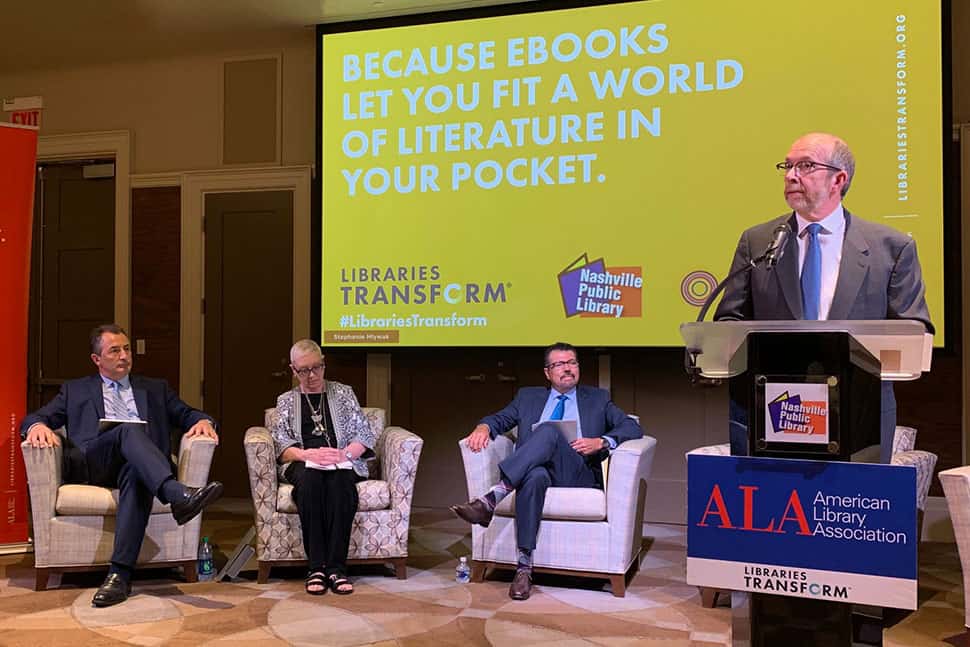 Starting November 1, Macmillan will limit libraries to purchasing one copy of each new ebook and impose an eight-week embargo on buying additional copies. ALA Executive Director Mary Ghikas said Macmillan’s new policy reveals a disturbing trend. ALA, which has been at the forefront of the ebook lending issue for much of the past decade, … END_OF_DOCUMENT_TOKEN_TO_BE_REPLACED 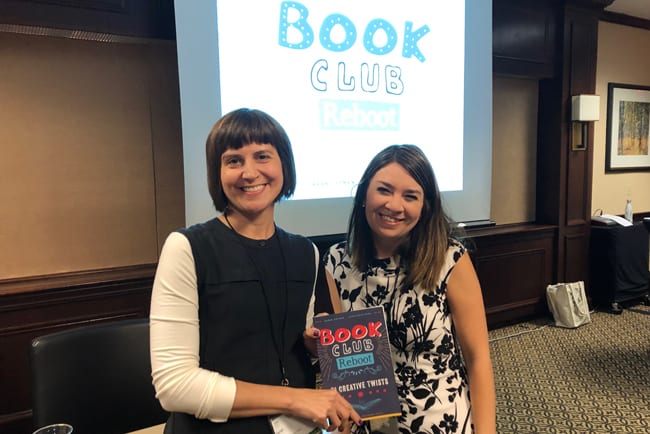 Book Clubs, the Census, and the Five Es 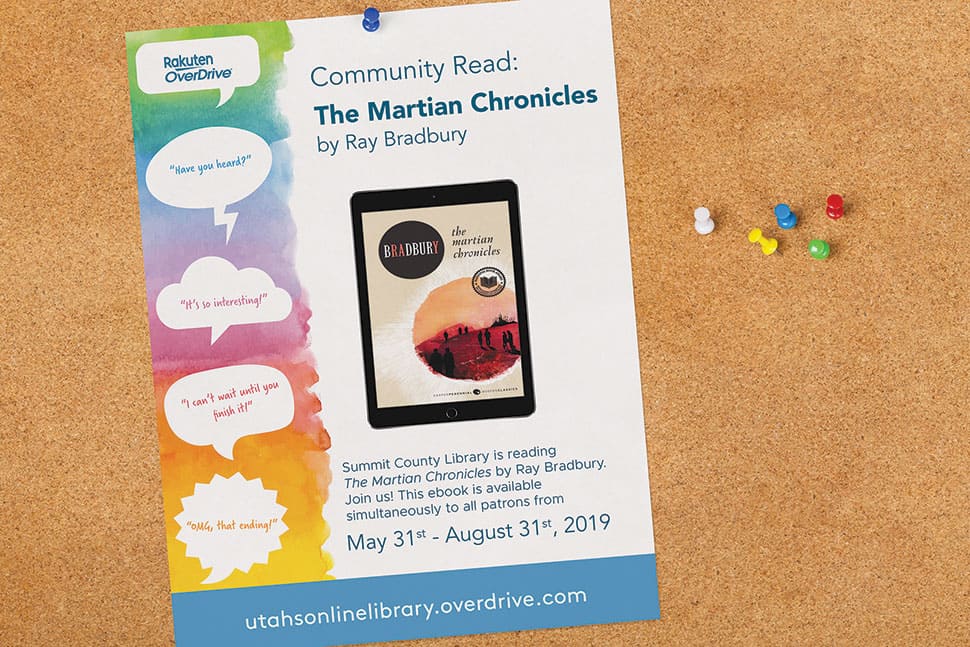 OverDrive Digital Book Clubs Libraries that have digital collections from OverDrive are automatically part of the company’s global ebook club, the Big Library Read, which makes select titles available for unlimited checkouts for a limited period three times a year. In addition to this large-scale reading program, the company also provides support for community-wide and … END_OF_DOCUMENT_TOKEN_TO_BE_REPLACED 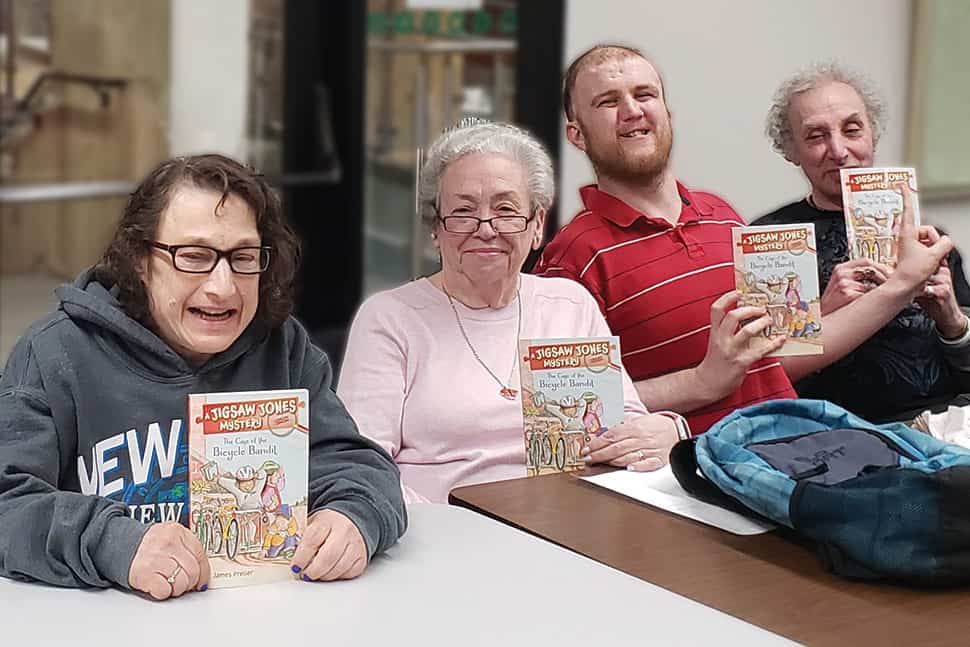 Everyone on the Same Page

“When people with developmental disabilities become 21, that’s the end of education for them, as if they don’t need to keep learning like other people keep learning as they get older,” says Comer, a trustee of the Port Washington (N.Y.) Public Library (PWPL). She enrolled her son in a local day program but found that … END_OF_DOCUMENT_TOKEN_TO_BE_REPLACED Surely, I thought, students will want to pour into the library, begging for the latest bestsellers. Imagine my surprise when one of the first students to enter the library asked, “Does anyone ever check books out?” After examining the stats, I found that students did not check out very many books. During my first nine … END_OF_DOCUMENT_TOKEN_TO_BE_REPLACED 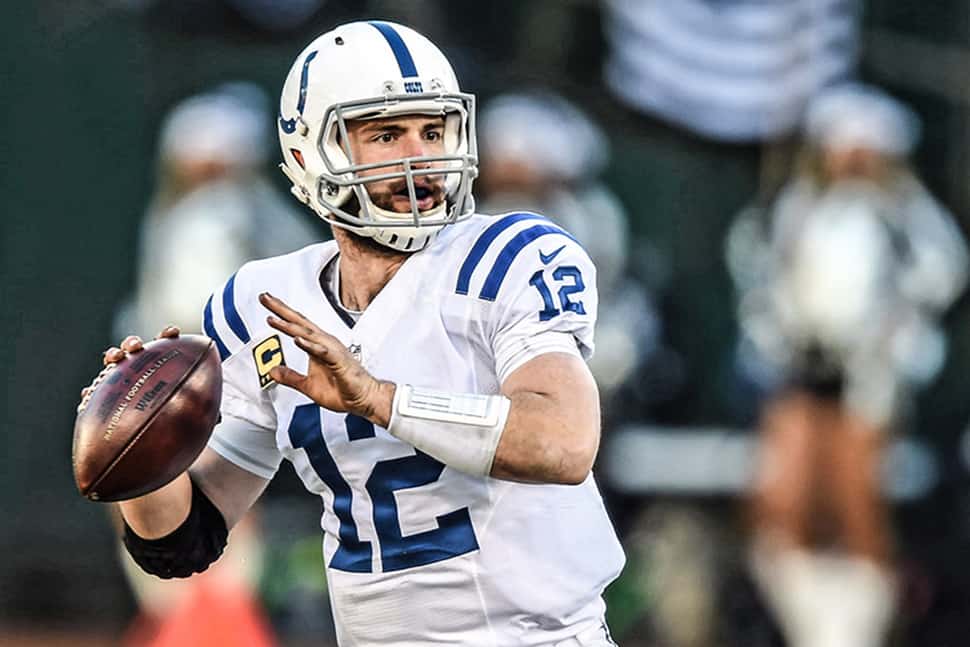 Have you always been an avid reader? Do you have any fond book or library memories from childhood? I always have been an avid reader. It was encouraged in our household. I remember an 18-hour car ride to Colorado from Houston, and reading Lonesome Dove [by Larry McMurtry] for like 17-and-a-half of those 18 hours. … END_OF_DOCUMENT_TOKEN_TO_BE_REPLACED Parker will recommend various titles for Book Club Central over the coming months; she plans to reveal the first during the June 24 President’s Program at the ALA Annual Conference and Exhibition in Chicago. She recently spoke with American Libraries about being a lifelong bookworm. Where does your love of reading come from? My mother … END_OF_DOCUMENT_TOKEN_TO_BE_REPLACED 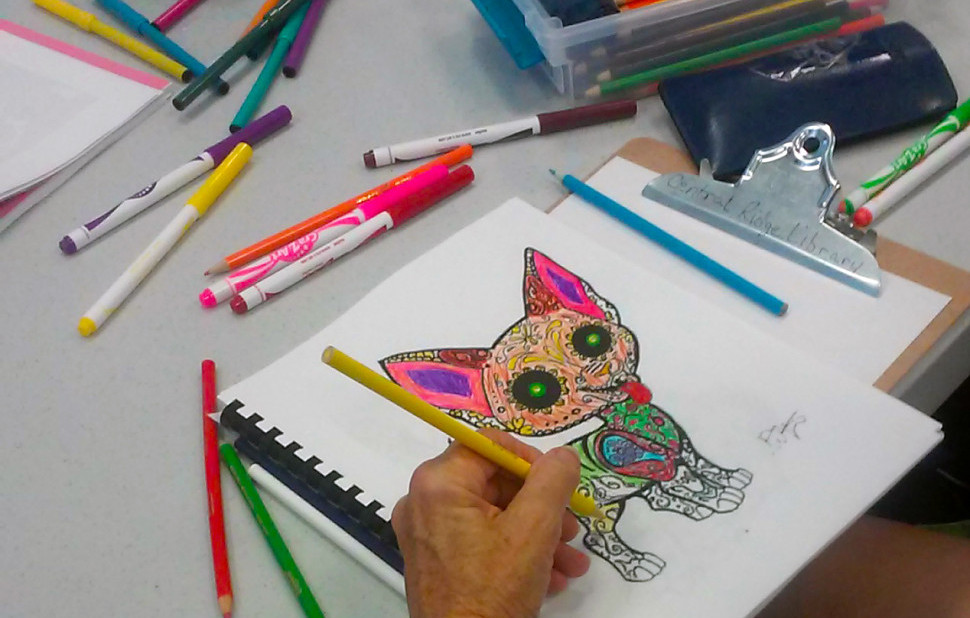 Editor’s note: A shorter version of this article originally appeared in The Scoop in August. “We purchase a couple of coloring books, I print out some free coloring pages that are available online, and we just get together and color,” says librarian Kellie Porter, who started the library’s Coloring Club in May. The club has … END_OF_DOCUMENT_TOKEN_TO_BE_REPLACED