How libraries handle the legacy of racist murals

In the 1930s and 1940s, federal programs such as the Works Progress Administration (WPA) paid artists and artisans to create thousands of artworks. Some of those works ended up on display in public buildings such as libraries.

Roughly eight decades later, some of the images depicted in those murals are now recognized as racist. Deciding whether to remove, alter, or retain these murals can be challenging; not all stakeholders agree on a course of action.

At University of Oregon’s (UO) Knight Library in Eugene, four stairwell murals commissioned under the WPA have been the center of scrutiny for many years. These murals include visual hierarchies in which Brown people using early tools appear at the bottom, while white people with items such as violins and motorized engines appear at the top. One of the murals also includes text invoking the preservation of “racial heritage.”

UO Provost and Senior Vice President Patrick Phillips says these murals are inappropriate in a library setting, which he calls the heart of student engagement on campus: “It feels like the most inclusive, welcoming place, so to have these additional barriers is not okay.”

The murals, which date to the library’s 1937 construction, have been a flashpoint for activists; in 2018, for example, an unknown person used red paint to strike out the words “racial heritage.”

The university previously attempted to address the situation by installing explanatory panels to contextualize the artworks. Protests in recent years, however, have pushed the administration to take more drastic action. Because the pieces are affixed to the walls, they cannot be removed without damaging the building. So, after a conservator assessment, the university committed to covering the paintings with aluminum panels, reportedly at a cost of just over $30,000. The murals were covered in September.

It’s not only students who object to racist artwork. At University of New Mexico’s (UNM) Zimmerman Library in Albuquerque, staff members have come out in opposition to four murals collectively known as Three Peoples that were commissioned in 1939 by the federal Public Works of Art Project (PWAP). The murals show Native Americans creating traditional crafts and performing manual labor, while white people are depicted as scientists and doctors. In one of the murals, a white man with clear facial features is flanked by a faceless Latino man and a faceless Native American man.

“Students can go study wherever they want, but the staff works there. They don’t really have any control over their environment,” says Assata Zerai, UNM vice president for equity and inclusion. Zerai also notes that many staffers have told her they feel that the mural contributes to a hostile work environment. “I have not had one person tell me we need the murals, but I’ve had hundreds of people ask me why they aren’t gone yet,” she says.

Earlier this year, library staff started an online petition—which by early September had drawn nearly 1,000 signatures—to have the murals removed. Also by September, UNM had submitted an application for the removal of the murals—which are listed on the National Register of Historic Places—to the state of New Mexico.

At University of Kentucky (UK) in Lexington, efforts to remove another PWAP-commissioned mural have attracted litigation, as well as debates about artistic censorship. The unnamed 1934 work by Ann Rice O’Hanlon, which depicts images of enslaved Black people working in a tobacco field and a Native American holding a tomahawk as if prepared to attack, is in one of the most heavily used classroom spaces on campus.

UK Chief Communications Officer Jay Blanton says the fresco’s location argues for its removal. “If you’re a student, there’s almost no way to go into class without viewing that mural,” he says. “I think students would say that … you should have a choice about whether to see that,” particularly since it may, for example, remind Black students that their “grandfather or great-grandfather was subjugated as chattel.”

As UK Libraries’ online research guide to the mural notes, “The complaints [about it] date back to at least the 1970s.” In 2015, UK President Eli Capilouto ordered the mural to be covered; in 2017, it was uncovered and contextual information was added; in 2018, a new work by artist Karyn Olivier was commissioned and installed nearby as a response to the original piece.

As students continued to protest, Capilouto agreed earlier this year to remove the mural, sparking a lawsuit filed by writer Wendell Berry and his wife, artist Tanya Amyx Berry, who argue that because the mural was created under a federal program, it belongs to the people of Kentucky and not to the university. (Mrs. Berry is a niece of the mural’s creator.) Meanwhile, Olivier told The New York Times that removing the mural would be censorship, not only of it but of her companion artwork as well.

UK has moved to dismiss the lawsuit. “I would say … removing art is not the same as erasing art,” Blanton says. “The university has the authority to remove [it], and we’re doing that, we think, to further dialogue, to further the exchange of ideas. In this case, we think the art is a barrier to that dialogue, not something that’s helping it.” 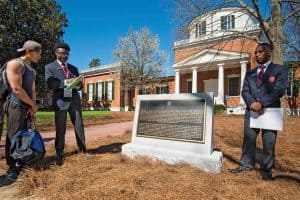 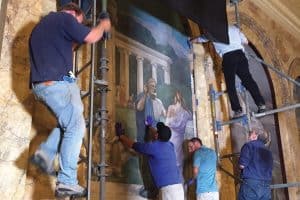