Ryan*, a librarian working in New England, was confused when she received an email from library administration about a man who had been banned from the building. When she asked a colleague what had happened, she learned there had been a “First Amendment audit.”

“My heart sank,” Ryan says. She had learned about these encounters in 2020 and knew what they entailed. In First Amendment audits, individuals arm themselves with video cameras, proclaim themselves “auditors,” and enter public buildings, like police precincts and libraries, to record alleged Constitutional violations. “I know what these people do, so when I heard it was a First Amendment audit, I thought, ‘Oh, no.’”

Libraries have been experiencing First Amendment audits for several years, but there has been an uptick in reported cases in 2021, according to the American Library Association’s (ALA) Office for Intellectual Freedom (OIF). And while the format of these audits is familiar, libraries are reporting more aggressive, targeted, and organized operations than in years past.

“We have seen a greater number [of First Amendment audits in 2021], and there could be many reasons for it,” says Deborah Caldwell-Stone, director of OIF. There is now a clearer mechanism for First Amendment auditors to profit from their videos, either through monetizing YouTube channels or using crowdfunding tools like Patreon and GoFundMe. Caldwell-Stone also notes the potential impact of pandemic-induced shutdowns. “We’re living in a time where there is a little more contention over politics, and some of it may be coming from that,” she says. “But there may also be a relationship to the fact that libraries are open again.”

OIF collects and analyzes data on an annual basis, Caldwell-Stone says, and the 2021 numbers should be available in spring 2022. A few trends have already emerged: Anecdotally, there has been an increasing number of reports “coming in from the Northeast in particular,” she says, and reports are up compared with 2020. More recently, auditors appear to be targeting smaller libraries whose staff might not have the resources and experience to de-escalate a volatile encounter.

What’s still uncertain is how 2021 numbers compare with those from before the COVID-19 pandemic, when more libraries were open. And as these cases see a resurgence, library staffers are split on whether they feel prepared—for the audits themselves or their aftermath.

In October 2019, OIF published a blog post that several library directors have used to better understand their legal grounds for interacting with auditors (see sidebar). Caldwell-Stone advises that staff refrain from intervening unless an auditor is violating behavior policies or harassing staff members or patrons. She also encourages library workers to revisit their behavior and social media policies and any rules concerning photography.

Stacy Wittmann, director of Eisenhower Public Library District (EPLD) in Harwood Heights, Illinois, took this advice when she heard some libraries were experiencing First Amendment audits. Wittmann met with department heads to collaborate on a strategy to prepare staff.

“The public-facing departments did go over all our policies with their staff,” she says. “As long as people aren’t violating our behavior policy, they have the right to photograph and record within the library.” Though EPLD has not experienced an audit, Wittmann says she feels reasonably ready for an encounter.

Preparing for a First Amendment audit is often a library’s best defense against a viral outcome. Library workers should take steps to limit an auditor’s ability to cause harm. The below tips are adapted from the ALA Office for Intellectual Freedom (OIF) blog post “Auditing the First Amendment at Your Public Library” by OIF Director Deborah Caldwell-Stone.

Understand the library’s role as a limited public forum. In limited public forums, staffers are only obligated to allow free speech that is consistent with the nature of that forum. In other words, library behavior and privacy policies can often supersede an individual’s right to film or photograph the space. As is the case in many courthouses, a library can regulate photography or filming inside the building even if the facility is open to the public.

Adopt or review written policies. Written policies can help staff members regulate behavior in a manner that respects every person’s right to privacy and safety. Staffers should be familiar with these policies to mitigate behavioral violations that may occur during an audit. As always, staff training and consultation with your state library or legal counsel are important parts of this process.

Know your rights and responsibilities. Public library workers are public employees. Several US Courts of Appeals have upheld a private citizen’s right to record audio and video of public employees carrying out their duties in a public space regardless of their consent. However, this does not include the right to harass or interfere with public employees as they carry out those duties.

Know when to engage. If a First Amendment auditor is not violating any behavior policies, avoid engaging. Most auditors enter these situations with a goal of getting a rise out of employees. If staffers do not give them that opportunity, auditors are more likely to leave without incident.

Jennifer Brown, executive director of The Field Library in Peekskill, New York, used OIF’s blog post to prepare herself and her staff after receiving a warning from her town’s police department to plan for a potential audit. The caution came after an encounter at a nearby library resulted in a viral video.

When the so-called auditor arrived 10 days later, Brown says she felt ready. “We knew what to expect, what this guy would try to do, what the policies from ALA are, and what our own policies were,” she says. The auditor stayed in the building for only six minutes. “He didn’t get a rise out of anybody, so he was kind of deflated and left. It doesn’t make for an interesting video if nobody stops you or tries to argue with you over your right to video.”

Brown notes that, in preparation for the audit, some library staff took off their name tags to help preserve personal privacy. She also says staff would have protested the man’s filming had he attempted to record minors or patrons using computers.

She credits her local police department with her ability to ready herself and her team for the encounter: “My advice is to already have that established relationship with the police department and make sure everybody is on the same page.”

The question of police intervention

Police presence in libraries remains a difficult topic, especially when staff and patron safety may be at risk; not all libraries can rely on local police to help them prepare for First Amendment audits. “I don’t think working with police is a scalable way of addressing this issue,” says Alison Macrina, director of the Library Freedom Project. “In fact, I could see very easily how they could make those situations worse.”

For Ryan in New England, police involvement escalated tension during her library’s audit, she says. The police were called shortly after the auditor’s arrival at the building. A now-viral video shows a heated exchange between police and the man, who has filed a lawsuit against the city (he was also charged with a misdemeanor). Library staff involved in the incident are not named in the lawsuit, but Ryan remains upset by the response from law enforcement.

“Having watched the video and seen how the police engaged with him, it’s really frustrating. I feel like they made it worse,” she says. “The way that they came in, itching for a fight, is everything that this guy wanted.”

While staffers are not featured in the viral video, the library has been the target of harassment through Facebook, Google reviews, and phone calls. Hostile messages have been posted on their children’s storytime videos as well, she says. Additionally, every time the so-called auditor updates his YouTube channel, the calls and comments begin again.

“What we’re all so exhausted by is the fact that this is not going to go away. The internet is forever, and any time this guy decides to post an update, it’s going to refresh the vitriol,” Ryan says. “It’s just so annoying that we’re going to have to be dealing with this in some fashion for ages.”

In the months since the First Amendment audit, Ryan’s library has continued to receive phone calls and one-star Google reviews from people outside of her community. The library has since eliminated the ability to comment on its Facebook posts, which has quelled some of the harassment. Still, Ryan says these interactions remain a consistent part of her workday.

“If I schedule something [on Facebook], and it posts, and I forget to go in and turn off commenting, they jump right on that,” she says. “Anytime we leave an opening, they find it.”

A First Amendment audit’s severity and virality appear to hinge on the response to the auditor, whether by library staff, security, or police. But it can be difficult to predict just how aggressive an auditor can be, as well as when they may arrive. Macrina says that library workers should use their own networks to prepare for encounters.

“We have our mailing lists, our Facebook groups, we have all kinds of ways that we talk to fellow library workers,” she says. “What we’re missing is the plan of action.”

Caldwell-Stone says her office has helped individual libraries develop policies and make improvements to existing ones. She notes that adapting OIF’s blog post into a set of guidelines is on the Intellectual Freedom Committee’s agenda.

And while some library workers believe this trend will fade if auditors don’t get the viral responses they seek, others are less hopeful. “I feel very cynical about it,” says Macrina. “I think we, as library workers, really need to prepare ourselves.”

A version of this article first appeared on americanlibraries.org on August 26, 2021. 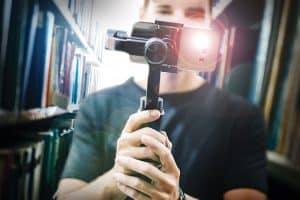 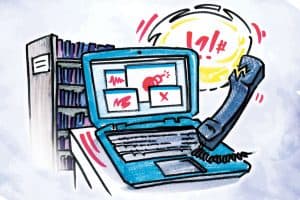