In January 2021, the American Library Association’s (ALA) Council passed a resolution declaring support for broadband as a human right. Yet the Federal Communications Commission (FCC) reports that ­approximately 19 million Americans lack broadband access, and “even in areas where broadband is available, approximately 100 million Americans still do not subscribe.” According to the Public Library Association’s (PLA) 2020 Public Library Technology Survey, released in September 2021, only half of all libraries provide some type of technology for use outside the library.

The pandemic threw the issue of unequal access to technology into sharp relief. Multiple funding bills have been proposed in the past few years—many with similar names—to alleviate this imbalance. However, staying on top of which bills have passed, what funding is available for libraries, and how librarians can get that funding can be a challenge.

Even for experts, the process is onerous. “It’s hard for me to keep track, and my specialty is broadband,” says John Windhausen Jr., executive director of the Schools, Health, and Libraries Broadband (SHLB) Coalition in Washington, D.C. “There are so many sources of funding. Congress has put more energy and more funding into broadband initiatives than ever before.”

Funding streams can have different sources—and targets. Larra Clark, deputy director of PLA and ALA’s Public Policy and Advocacy Office, advocates for funding and resources on two levels: those specifically aimed at libraries, such as the E-Rate program, and those that maximize resources for serving community members, such as the Emergency Broadband Benefit. “I think sometimes those two streams can get muddy,” she says. “But they’re both important to the communities we serve.”

Some of the programs available are long-standing, such as E-Rate, which is administered by the Universal Service Administrative Company (USAC), a contractor to the FCC, as part of the Telecommunications Act of 1996. “[E-Rate] provides schools and libraries with discounts on broadband connection, cost of internet access, and internal networking,” says Robert Bocher, an ALA Public Policy and Advocacy fellow and former USAC board member based in Madison, Wisconsin. He adds that because E-Rate is funded by continuing appropriations, it’s not subject to the political vagaries of other funding sources. The program provides libraries with discounts of up to 90% off their broadband bills, and community eligibility is based on National School Lunch Program guidelines.

Bocher says the program is noncompetitive but many libraries lack the resources to apply. “There’s enough money to fund all the applications, and everyone qualifies,” he notes. “But the application process is complicated, and smaller libraries often find it difficult to fill out the applications and deal with the FCC requirements.”

Alan S. Inouye, ALA’s senior director of public policy and government relations, acknowledges the problem. “As you might guess, there’s a consulting industry that’s grown up around this. However, it tends to help only larger library systems. If you’re applying for a seven-figure E-Rate grant, paying a consultant may be worth it, but not for a small library.”

Sovereign tribal libraries that had been denied access to E-Rate funds because of federal guidelines can now qualify as well. On January 27, at its open commission meeting, the FCC unanimously voted to clarify that tribal libraries are eligible for E-Rate. Previously, it was defined that applicants needed to be eligible for assistance from a state library agency. Bocher says that organizations such as the Association of Tribal Archives, Libraries, and Museums may be able to help with the application process now that the FCC has changed its guidelines.

Further funding came in March 2021 when the American Rescue Plan Act (ARPA) passed. It includes the Emergency Connectivity Fund (ECF) and the Emergency Broadband Benefit (EBB). The $7.17 billion ECF was designed to help schools and libraries assist their communities with remote learning. Yet, unlike E-Rate, the ECF is a 100% reimbursement program.

“It’s free money,” Inouye says. “The ECF pays for the devices, laptops, tablets, and that kind of thing. And ECF pays for hotspots.” He says he had hoped that the ECF would be bolstered by an additional $300 million from the Build Back Better Act, but the bill hit a wall in the Senate in January. Instead, says Inouye, that funding is now “speculative” as legislators attempt to break the spending package into individual bills for passage.

ARPA has earmarked $130 billion for a local fiscal recovery fund, Bocher says. “That money goes to states and localities, and libraries could get some of this funding [for broadband infrastructure projects].” He says an additional $200 million in ARPA funds is going to the Institute of Museum and Library Services (IMLS) and can be used to purchase laptops and hotspots. “Most states are in the process of getting applications out for this,” Bocher says. “We rely heavily on state agencies to get the word out on funding resources, specifically on the IMLS funding.”

The Infrastructure Investment and Jobs Act (IIJA), which passed in November 2021, provides an additional $65 billion in broadband investments. “It includes $14 billion for a $30-per-month, low-income subsidy program,” says Windhausen. “[The SHLB Coalition] said we’re supporting that, but the average price of broadband nationwide is $65 per month, so $30 may not be sufficient.” Windhausen says IIJA also includes $1 billion for middle-mile deployment, which is meant to connect anchor institutions (such as libraries) to the internet, as well as $2 billion for tribal libraries, which is separate from the E-Rate tribal library initiative. Another $2 billion will be available for rural services, and additional funding is provided for private activity bonds that allow localities to borrow money.

Additionally, IIJA includes the Digital Equity Act (DEA), which provides $2.75 billion for digital inclusion and digital literacy, says Inouye. “That’s the human side of how to make use of all that technology, and libraries are well-positioned for that,” he says. “There’s also $43 billion for broadband deployment in areas that don’t have much broadband access. That’s for digging ditches and laying cables for unserved and underserved areas.”

“The DEA has the most potential for libraries,” Windhausen says. “If libraries collaborate and submit joint applications, that could provide them with the funding to hire the staff they need, and the consulting firm costs could even be included in the application.”

There may also be more funding initiatives coming in 2022. The Build America’s Libraries Act (BALA) proposes $5 billion to modernize library infrastructure to address broadband, environmental, and accessibility challenges. Although not included in the Build Back Better spending bill, BALA is not likely to be “scrapped completely,” says Inouye.

In the process of working on the legislation, he says, “we discovered many libraries could use some help in rebuilding and renovation.” More than 100 members of Congress endorsed BALA, Inouye says, so the legislation may take another form, possibly as a standalone bill or part of the FY2023 appropriations bill.

Windhausen adds that since a lot of funding goes through the states, governors have a say about allocation. “ALA and SHLB will try to convince them that libraries get this funding,” he says. “But [telecom companies] will try to discourage investment in regions where they have coverage, even though they may only provide perfunctory coverage. Their lobbying efforts often have the effect of denying coverage to needy communities.”

COVID-19, advocacy, and the long game

That’s why advocacy work on behalf of libraries is so crucial, says Clark. “Library workers do things that aren’t visible to their communities,” she says. “ALA also does work that isn’t always visible to libraries,” like developing relationships to influence policy. “The long-term nature of our broadband advocacy is important. We’ve had setbacks and wins, but it’s a long game.”

Bocher says the pandemic has helped libraries develop better relationships with their communities to help ease overall connectivity problems, which may be a stopgap until more funding becomes available. “We have this homework gap in K–12, where 9–13 million students don’t have digital access,” he says. “But now we have a fair number of programs targeting those students, which means COVID-19 has helped close that gap.” This will be especially important as funding remains in flux, he says.

Even so, Windhausen says, libraries should dream big. He suggests assembling “your most comprehensive plan of attack” to get everybody connected. He also encourages libraries to develop relationships with governors and other officials and ask to be included on task forces. “Libraries need to be seated at that table,” he says. Find out if patrons have broadband at home and collect that data. “It can be anonymous,” he says, “but ask how much it costs, and learn what parts of the community to target.”

Clark says visibility is the key to funding and advocacy. “Libraries are rightly seen as leaders in digital equity,” she says. “It’s important as we come out of the pandemic to be visible.” Send a report about what your library is doing through EBB, E-Rate, or the ECF to decision makers at city, state, and federal levels, she advises. Let them know what you could do if you had more support.

Technology also needs to be considered in a broader context, says Inouye. “People go to libraries looking for new jobs, or health information, or looking for help with schoolwork, or information about traveling,” he says. “These are the things people care about. Access to technology is a means to an end.” 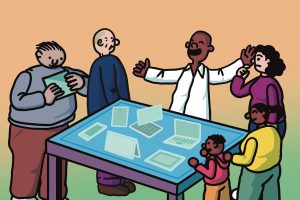 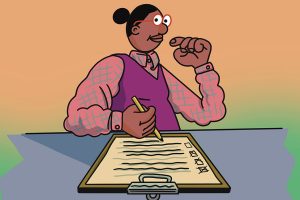 Toolkit enables libraries to advocate for their broadband connections