At the American Library Association (ALA) Annual Meeting and Conference in New Orleans June 25, the Library and Information Technology Association featured a fast-paced program on artificial intelligence (AI) given by Bohyun Kim, chief technology officer at the University of Rhode Island (URI) libraries in Kingston. This fall, what is believed to be the first AI laboratory in an academic library setting will open at URI. Kim gave a quick history of AI, a term coined by computer scientist John McCarthy in 1956.

“AI began to be used more in the 1980s, when expert systems were developed to mimic the human decision-making process,” Kim said. The technology has advanced profoundly because the internet “allows a vaster scale of data, and high-speed computing has multiplied the power of processing.” Advances in artificial neural networks have produced a technique called deep learning, which has enabled an array of such technologies as driverless cars, Netflix recommendations, real-time language translations, and medical imaging that can outpace human radiologists.

Where do libraries fit into all this? Kim suggested several immediate ways in which AI has added to or improved library services:

Kim asked, “Are libraries ready for intelligent machines that directly interact with human users? There certainly are opportunities for improving existing services and programs.” But there are challenges as well. “The more AI improves and the more things get delegated to machines,” Kim said, “the risks increase. Not everything is rainbows and unicorns.” As Will Knight has pointed out in the MIT Technology Review, “the dark secret at the heart of AI,” Kim said, “is that we really don’t know what these machines are doing. They are essentially black boxes that could become an Achilles heel. How do we know the results are fair or unbiased?”

In many cases, the AI tools are proprietary, complex, and cannot be evaluated by an outside assessor. Some AI algorithms reflect the biases and values of the people who create them, as Safiya Noble warned in Algorithms of Oppression (NYU Press, 2018). Kim pointed out that facial recognition software “works pretty well if you are a white guy (with an error rate of 1%).” But the MIT Media Lab has found that in one AI system, the error rate in identifying a person’s gender was 7% for light-skinned females, 12% for darker-skinned males, and 35% for darker-skinned females. “The problem is the data,” Kim said. Providing less data on dark-skinned persons will skew the results, no matter the algorithm. “We need more transparency in this field,” Kim said. “One way to do that is to introduce explainable AI systems that reveal their decision-making processes.”

“The future of AI,” Kim said, “will require us to redefine ‘intelligence.’ Even now, it’s more confusing than it was 10 years ago. And what happens when androids develop consciousness? How will we interact with them?” Kim said a standard dilemma in ethics is the “trolley problem,” in which the operator of a runaway car must decide whether to go down one track and run over five people, or switch to another track and run over only one. “This thought problem is unsolvable enough for humans, but what would an AI do? Of course, ethics isn’t there to answer all the questions; ethics only exists to show how complicated the questions are in the first place.”

Kim summed up: “AI is bringing multiple changes to information, knowledge, and intelligence, and all these will have an impact on libraries.” 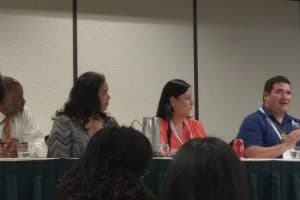