Artist, activist, and author Patrisse Cullors began the Opening General Session at the American Library Association Midwinter Meeting & Exhibits in Denver by telling the story of her 4th-grade teacher.

Cullors’s parents had talked to her a little about the civil rights movement, but left out details. Mrs. Goldberg at Erwin Street Elementary School in Van Nuys, California, however, gave young Patrisse books to fill in the gaps, such as Mildred D. Taylor’s The Gold Cadillac. Goldberg also allowed Cullors to report on the books to the whole class, an opportunity that changed her life.

“This part of education—the part where I get to be curious, get to be engaged—is the part I loved the most,” Cullors told attendees. “This is the foundation for my activism.”

Cullors was interviewed onstage by another young activist, Marley Dias, the 13-year-old creator of the #1000BlackGirlBooks campaign and author of Marley Dias Gets It Done: And So Can You! The two engaged in an alternately thoughtful and animated conversation that ranged from Cullors’s hopes for raising a feminist son to intersectionality and identities to self-care in troubled times.

She gave Dias advice on managing her physical and emotional health, such as committing to “laughter time” with family and having a good team around you to set boundaries and be supportive. If you get stuck in the moment, it’s easy to get sad, she noted. “People before me fought harder fights and won. But I believe we will win.”

Dias then shared her tips for managing social media stress, such as having her parents remove messages from trolls and refusing to give time and space to detractors.

Dias asked Cullors, “If you could live in any book universe, but you still had to start a movement there, what would you pick?” Cullors responded with The Lion, the Witch, and the Wardrobe. The energy of sci-fi allows you to escape this world and imagine a new world, but that genre often lacks people of color and women. “That’s what I would fight for in that world,” she said.

Cullors’s last words for librarians and book nerds to be better citizens: Be curious about children, meet them where they are, and give them capacity to be their best selves.

She declared her talk with Dias “the best interview I’ve ever had.”

The session was opened by ALA President Jim Neal, who addressed the recent FY2018 budget agreement and the upcoming budget cycle for 2019, which is again expected to zero out federal library funding. Neal urged members to check the ALA Washington Office resource page for the latest information and calls to action. 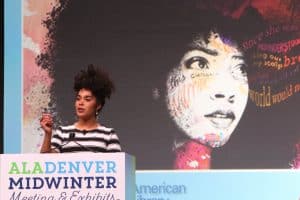 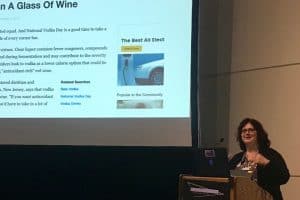