Presenters share tips that made their libraries' capital campaigns easier

Community connections are critical to successfully making the “ask” for major gifts. McKay spoke about the importance of identifying community prospects, a difficult task as she was new in Effingham. “I went to everything—every chamber event, any civic group that would have me, I went to talk to them,” she said.

Coughran credited her membership in Rotary for helping secure a $1 million donation from an angel investor. “If I had not had a decade-plus of being a Rotarian in the community, going to meetings once a week faithfully, then she would not have donated those funds,” Coughran said.

To start to overcome the awkwardness of asking for money, McKay started with the easiest possible visit: A former library board president. “I knew she would say yes if I could just get the words out,” she recalled. “It was an incredibly awkward conversation that she was incredibly gracious to listen to me stammer through.” She eventually managed to ask for $100,000 to be a lead donor for the campaign, and the former president immediately said yes. “It was hard not to backpedal. You have to just say the words and stop talking, and let them answer.”

In other conversations with potential donors, McKay did “overshoot” by asking for more than the donor could give—once. But many more donors did say yes, and in most cases, careful research ahead of time gave a good sense of what donors might be able and interested in giving.

Strategic acknowledgement of gifts was an important part of the process for LSFBL. The library held a “Donors Circle” party midway through the campaign. They both invited donors and encouraged them to bring other community members to see the project and consider contributing.

Coughran used an advertisement in the local newspaper to both thank donors and encourage others. “The thing about a full-page ad is, you’re going to notice whose name is not there,” she said. The prospect of being left out spurred many hesitant organizations to make their donations.

A surprisingly successful element was a donor wall within the library. The library printed donor names directly on the wall, with larger donors in a larger font. “People whose names weren’t on the wall, all they could say was, ‘How do I get my name on the wall?’” Coughran recalled. Future donors will have the opportunity, because the library plans to continue the donor wall around the adjacent corner.

The donor wall was a surprise to donors at the grand opening. Coughran said that keeping it quiet helped to avoid donors trying to micromanage font sizes and colors. “Don’t be afraid to surprise people—you don’t have to tell everybody every little thing,” Coughran said. 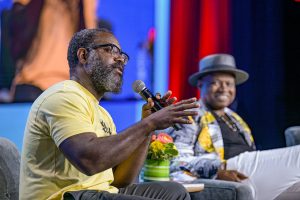 ‘Our Access Point to the Humanity We Cannot Touch’