CPL Commissioner Brian Bannon tells American Libraries that the program—already in place at the Harold Washington Library Center and other locations throughout the city—will expand to six new branches. A pop-up version will bring YOUmedia to 12 more neighborhoods, giving teens one- or two-day experiences with the latest technology, he says.

“It’s all part of our larger plan of expanding our reach and engagement with teens throughout the city,” Bannon says.

The program is funded by a $2 million grant from the John D. and Catherine T. MacArthur Foundation and $500,000 in additional funding from the City of Chicago’s 2014 budget.

Bannon says the YOUmedia concept subscribes to the idea that “teens learn best as part of their social network.” The program invites teens to “hang out” with friends at the teen library, “mess around” with an array of digital and analog media offerings, and then “geek out” once they’ve found something that sparks their interest. Gaming, graphic design, music, moviemaking, 3D printing, and a vast selection of computer and programming software are among the options offered.

YOUmedia “supports deeper learning when the time is right,” Bannon says, noting that more than 1,500 teens across the city currently participate in the YOUmedia programs.

In addition to the expansion of the YOUmedia sites, the city is dedicating the $500,000 budget increase to establish a Teen Services Department, with 26 additional librarians and a new director who will focus on the needs of its teenage patrons. Bannon says teen services was previously housed within the library’s Children’s Department.

“The library has been increasing our focus on teens for several years, through YOUmedia, and this department will allow us to continue that deeper engagement with students as they develop the skills needed for their adult lives,” Bannon said in a February 20 news release.

Since the program was launched in 2009 through a MacArthur Foundation grant, it has been adopted in some 30 cities across the country, including in major metropolitan cities such as San Francisco and Boston, Bannon says.

The foundation has supported research on how digital media is changing the ways young people learn, according to the news release.

“MacArthur helped to create and support the innovative YOUmedia space, where teens can access library resources, technology, and in-person and online mentors that help connect their learning experiences to their interests,” foundation president Robert Gallucci said in the news release. “We are pleased to help the library expand YOUmedia to even more city neighborhoods and proud that it serves as a model for libraries across the country.”

A discussion on open access publishing at academic libraries 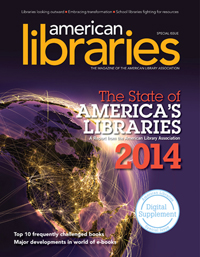 The State of America’s Libraries, 2014