Examining cataloging and identity at SAA 2019

Language is important to how individuals identify. The more diverse and accepted the available language, the more likely people are to view their identities positively. That was one conclusion discussed during “Discovering the Hidden: Making LGBTQ Collections More Accessible to Researchers” at the Archives*Records 2019 Conference in Austin, Texas—held by the Society of American Archivists (SAA) and the Council of State Archivists July 31–August 6. The speakers also gave an overview of processing and cataloging challenges and the issues that surround describing historical LGBTQ collections using 21st-century descriptors.

Linda J. Long, curator of manuscripts in special collections and university archives at University of Oregon Libraries, provided background on the history and politics of archiving LGBTQ collections and examined the roadblocks that have impeded the accessibility of these collections. University of Montana Digital Archivist Erin Baucom discussed how the use of language incompatible with a person’s identity could increase the stigmatization and discrimination an individual experiences. She also pointed out the necessity of maintaining a balance between modern and historic terms as history can be distorted without the proper context. According to Baucom, modern terms might retain their original spelling, but the definitions can be vastly different.

Archives play a pivotal role in identity formation because the terms archivists use can affect how a group is viewed in the historical record. Baucom provided some suggestions for achieving identity formation and using inclusive language, especially by establishing subject guides using both new and old terminology and partnering with the local LGBTQ community to create fresh descriptors.

Elisa Landaverde, metadata librarian and LGBTQ+ collection curator at Michigan State University (MSU), delved into old and new LGBTQ+ terminology used in archives. Focusing on the MSU Libraries American Radicalism Vertical Files LGBTQ+ Collection, Landaverde discussed the evolution of Library of Congress subject heading definitions for LGBTQ+ collections and how this progression has affected collections and archiving in general, as well as access to materials.

BROOKE MORRIS-CHOTT is program officer, communications, for the Association for Library Collections and Technical Services, a division of the American Library Association. 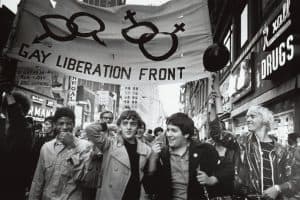