Reading groups as part of the design process

How can speculative design address climate change? “We did what we could to not say ‘we’re going to solve this huge important problem,’” John Jung, programmer analyst at University of Chicago Libraries, said.

Jung and Renee Albrecht-Mallinger, senior design researcher at IA Collaborative, hosted a reading group at a collaborative art space in Chicago to address climate change through speculative design, with an end goal of creating an art piece that would engage people and get them to think more deeply about the topic. Jung spoke about the group on Sunday at the ALA Midwinter Meeting in Philadelphia as a part of the Symposium on the Future of Libraries.

“Sometimes when I present work about speculative and critical design, people will say ‘I have this problem at work, is this a framework I can use to solve this problem?’” Jung said. Rather than being a panacea, however, “approaches like this are more about problem-finding than problem-solving.” With critical readings and art pieces on the syllabus, Jung found that the reading group format naturally kept the focus away from big solutions. “Most of the people came in to be problem-finding anyway,” he said.

Jung and Albrecht-Mallinger envisioned the group as an experiment in design process and compared the readings to bringing in an expert speaker.

In planning for the group, Jung and Albrecht-Mallinger chose to cater the course to adult learners who were already connected to LATITUDE, the host space. “Running a group like this had the advantage of reaching out to people who couldn’t or weren’t interested in higher formal education but wanted to have these discussions,” Jung said. They chose not to allow drop-ins after the start of the eight-week discussion group, which allowed the group get to know each other and build trust so they would feel comfortable critiquing each other’s ideas.

People who participated were generally college-educated and were interested in the arts, according to Jung. However, he acknowledged that the group would have benefited from more diverse participants. Reaching out to different groups would offer more opportunities to identify biases and work more closely with people with other perspectives, he said, and highlights libraries as a way to expand that reach.

With tough topics come strong emotions. Jung and Albrecht-Mallinger found that it was important to keep the syllabus flexible so they could make changes according to what the participants wanted or needed, and to avoid emotional burnout. “Reading about projects [like #NoDAPL] created some unresolved tension in our group,” because everyone knew that, while they were effective in raising awareness, they ultimately failed, Jung said. After an intense discussion where the group concluded it was likely that governments would respond to climate change with more authoritarianism, the two decided to add lighter, more hopeful reading.

The final two weeks of the group were spent brainstorming a design project that members could choose to continue work on after the end of the eight weeks. They chose to write a screenplay exploring how climate is portrayed in the media, expanding on ideas from an art piece distributed in 2008 that was a fake, hopeful version of the New York Times, which, the group agreed, was not a format that would be effective now that “fake news” is a common term.

While he acknowledged that the whole eight weeks could have been devoted to brainstorming and design work, exploring ideas through reading helped guide the group to new understanding and collaboration. “Finding a piece of the problem to work on is a challenge in itself,” Jung says. 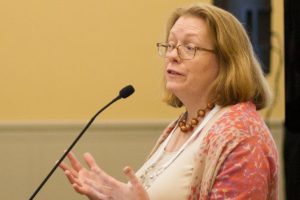