In this provocatively titled session on Saturday, “Girls Like Fart Jokes and Boys Have Feelings,” moderator Angie Manfredi, head of youth services for the Los Alamos County (N.Mex.) Library System, looked at the gender divide in books for kids and young adults and what librarians can do to minimize it.

Panelist Hannah Gomez, a librarian at an all-girl school, has found that there’s a tiny stack of “authorized” books about boys that her students are willing to read. “If it’s about a boy and not by John Green, they’re not interested.”

With young adult books, girl books are expected to have romance, boy books have action and not “icky feelings or kissing,” panelist and YA author Stephanie Kuehn said.

But how did it get this way?

Panelist Jordan Brown, a children’s book editor with HarperCollins, quipped, “Because boys are born without the part of the brain that contains empathy. Sorry, did you want the sarcastic answer?”

In her experience as a librarian, Manfredi said, kids ask for boy books or girl books because they’re scared and don’t know what else to ask for. She tells them, “Miss Angie doesn’t believe there are books for boys or girls, there are just books. And parents are a little ashamed when I say that. But it’s a good way to deescalate the situation.”

“Boy books and girl books are marketing constructs. They can be useful in a lot of ways, but they are problematic when there are greater issues in the culture around gender. Then ‘great book for boys’ becomes ‘great book only for boys.’ As an editor, I care about writers. This is limiting to their careers,” Brown noted.

Manfredi then asked how librarians could interact with our colleagues—editors, other librarians, patrons—to do better?

The overwhelming advice? Look beyond the covers.

“Teach people how to close-read,” Gomez said. “We got into this profession because we love to read.” One book can be about so many topics, so learn to talk about the subjects other than just what’s depicted on the cover.

Another tip is to be aware of your own biases and stereotypes when discussing a book. “A lot of people expect sexism to look the same way it did in the 1920s,” said Brown. Would anyone say a male character is spunky, shrill, or sassy?

Be mindful, Kuehn noted. If you’re organizing a panel about getting boys to read, for example, don’t fill the panel with just guys. When setting up displays in the library, organize them by topic—sports, holidays, space travel, science—not by gender, and find books with different kinds of characters to fill out the table.

“The job of all of us in the business of giving books to kids is to expand their capacity for empathy—books about people who don’t look like you or act like you or live where you live,” Brown said. 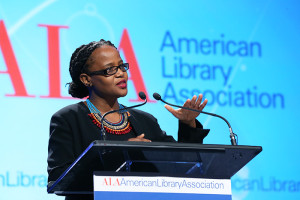 Edwidge Danticat: The Power of Books and Librarians

Haitian-American author discusses the hope and trauma of immigration and separation, and writing about hard truths 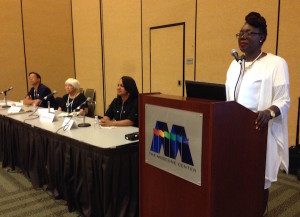