In the four years the course has been held, undergraduates taking “Southern Memory: Lynching in the South” at the University of Alabama have contributed brand-new research on lynchings in seven Alabama counties and discovered previously undocumented victims. Using digitized newspaper archives and local sources including court documents, census records, and sheriff’s records, they contribute to a digital humanities database that connects reports and expands understanding of this history.

The team of librarians who helped shape this course through collaboration with instructors shared their experience at “Metadata Instruction Mobilizing Human Rights Research in the Undergraduate Classroom” on Saturday, January 25 at the ALA Midwinter Meeting & Exhibits in Philadelphia.

The project began when a history professor approached Alex Boucher, research and instructional services librarian and history liaison at University of Alabama libraries, about developing a research plan for a new course. Building on an existing database from the Equal Justice Institute, the professor wanted undergraduates to expand what was known about lynchings in Alabama.

“This class does the most intensive research of any class I’ve had by far,” says Boucher. Students learn historical context and then, in groups, do in-depth research on an individual lynching. Boucher, after leading two class sessions on research sources and methods, provides guidance to each of the groups and occasionally travels to onsite research locations. “As a vehicle for teaching research skills by itself, this class has been a huge success,” Boucher says.

Without metadata, however, the kinds of data students were collecting would just sit “in glorious isolation,” says Emma Wilson, former digital humanities librarian at the University of Alabama, now a professor of English at Southern Methodist University. Mary Alexander, then-coordinator of metadata (now retired), determined an appropriate metadata schema for the project, taught metadata concepts to students in the class, and created training materials. For many students, this was their first time creating metadata. While many of them were hesitant to leave fields blank, Alexander was quick to explain “if you don’t have the data, it’s okay to skip.”

“When students pursue key research questions,” Wilson says, “there’s really the chance to show them the impact metadata can have on discovery.”

Wilson, who coordinated the library’s involvement with the course, provided a rubric for implementing similar digital humanities projects at other universities. Now at a smaller, private institution, she observed that the steps were much the same regardless of size.

Making research accessible through digital humanities projects reinforces the importance of the humanities at a time that they’re challenged for investment and interest, Wilson says. And, for students, feeling like they’re doing important work and making new discoveries “can generate real excitement,” Boucher says. “Which leads to good research.” 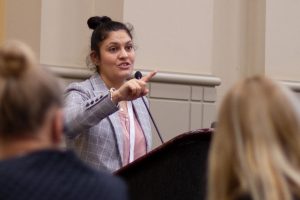 Creating a makerspace where students build empathy alongside design challenges 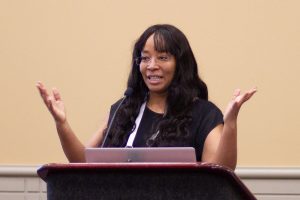