Time to Put Your Phone Away and Talk

Licensed clinical psychologist, author, and Massachusetts Institute of Technology professor of the social studies of science and technology, Sherry Turkle has spent 30 years studying people’s relationships with technology. If she could boil her work down to one salient idea, she says it would be that technology can make us forget what we know about life.

In speaking at the early morning Big Ideas session today at the Public Library Association 2016 conference in Denver, sponsored by Penguin Random House, Turkle drove home her point with numerous studies and anecdotes about people of all ages who find their phones have interfered with developing personal relationships.

In the last 20 years, she said of one such survey, levels of empathy in college students have declined 40%, with most of that decline coming in the last ten years, corresponding with the rise in smartphone use.

“We don’t have to give up our phones, but we need to use them more wisely,” she said.

She told a story of a 37-year-old man with two daughters. He recalled that when his 11-year-old daughter was a toddler, he enjoyed reading stories to her while she took her evening bath. But now, with his 2-year-old daughter, he puts her in the tub, closes the toilet seat lid, sits down, and pulls out his phone to read email.

“We are at a moment of friction. People have a new romance with their phones, but they don’t feel quite comfortable with it,” she said.

Turkle recommended people put away phones during mealtimes, because even the presence of a phone, overturned and silent, causes people to speak about lighter topics and be less engaged with one another.

In addition, people are becoming less comfortable with silence and moments of “boredom” which are essential to brain development. People continue to admire and embrace multitasking, even though it has been proven to make people less effective. “Reclaim unitasking. Reclaim your capacity for solitude. You need the capacity to be alone in order to have the capacity for conversation.”

Reading, of course, can be a solitary activity. Turkle warned the audience about the “push to use robots as companions” for reading to children or listening to the elderly. “There’s a myth that if technology gets us into a problem, technology will get us out,” she said. Librarians should be wary of these technological ways to engage children in reading because they cannot replace face-to-face conversation and the engagement that comes from adults reading to children.

Librarians should avoid letting patron interaction become a transaction rather than a relationship, she said. 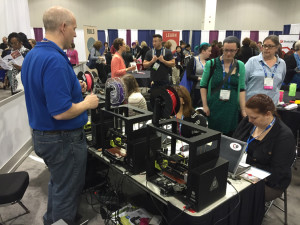 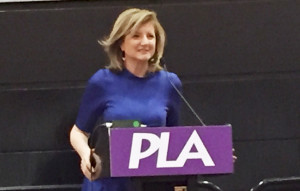