Patti Fleser, ISLMA president and school librarian at Deer Path Middle School in Lake Forest, Illinois, says the open letter addresses the “trend of school districts cutting their librarian positions at a time when it’s been proven over and over again that school librarians and effective school library programs increase students’ academic achievement.”

ISLMA’s letter urges administrators to use Every Student Succeeds Act (ESSA) funding to reinvest in in school librarians. ESSA authorizes states to use federal money for effective school library programs. Fleser says they have received no response yet from CPS.

“There have been multiple studies in Illinois, Pennsylvania, Colorado, New Jersey, that show that reading levels, standardized test scores, everything goes up when you have a full-time, certified school librarian. We’re not happy that school districts are not paying attention to the data that’s out there,” Fleser says. “Ultimately, we’re hoping to get those positions reinstated.”

ISLMA has also been working with the Illinois State Board of Education (ISBE) to ensure ESSA funding makes it to other state districts for effective school library programs. ISBE is doing a listening tour in September and October for education stakeholders to provide public comment on how it implements ESSA. Fleser says librarians have been attending these meetings to stress the importance of school librarians and school library programs.

Fleser encourages parents and students to talk to school administrators and tell them how important librarians are for academic achievement, reading, and overall readiness for education and for the world. 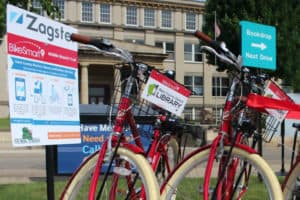 Serving the Patrons of the Future