If you’ve recently published scholarly research, either as an article in a peer reviewed journal or a monograph, you likely collaborated on that research.  That was the main point conveyed in “Modernized Collaborations: Technologies Affecting Librarian Research Connections” at the Symposium on the Future of Libraries, held during the American Library Association’s 2019 Midwinter Meeting & Exhibits in Seattle.

Ngoc-Yen Tran, research impact librarian, and Emily Chan, interim associate dean for research and scholarship, both from San Jose State University, presented a plethora of data from various studies indicating that collaborating on research is up, and single author publication is down.

In the first five years of College & Research Libraries’ existence, less than 5% of the articles published included multiple authors. In 1989-1994, 59.4% of College & Research Libraries articles included multiple authors, and that is up from 45.9% in 1985-1989 and 31.9% in 1980-1984. Co-authorship is becoming the norm in academic research.  So where are all these authors finding collaborators?

Some researchers find successful collaborations through mutual colleagues, or by “being open to collaboration.”  Outside “where I work or have worked,” “by being open to collaborations,” “through someone I know,” and “at a conference or other meeting,” the most successful strategy for finding research collaborators was “other.”  “Other” included professional associations and committee work, listservs, participation in cohort-based programs, alumni networks, and consortium/professional networks.

Avid social media users, don’t despair. Even though you might not find successful collaboration partners for research via social media, you’re likely following people Tran and Chan refer to as “thought leaders” and contributing meaningfully to professional dialogues and trends in librarianship.  Tran and Chan also note that 56.9% of social media and research network users are 24-34 years old, so “the strategies will continue to grow in popularity as social media and research networks gain ground and become established as authoritative/legitimate avenues for processional dissemination.” 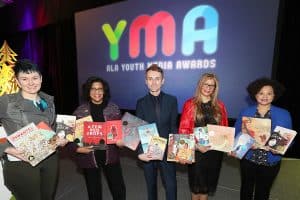 Top books, video, and audiobooks for children and young adults revealed at Midwinter in Seattle