Ebooks and their lending models were approached from multiple angles during sessions at the American Library Association’s (ALA) 2020 Midwinter Meeting & Exhibits in Philadelphia. A panel discussion on January 26 updated members on the ongoing #eBooksForAll campaign that began in response to Macmillan Publishing’s eight-week embargo of new ebook titles for libraries.

Salazar noted that the embargo affects all libraries, public libraries in particular. ALA has been talking with stakeholder groups like the Chief Officers of State Library Agencies, the Association for Rural and Small Libraries, and United for Libraries in its efforts to build an alliance to push back against Macmillan.

Feldman, ALA senior policy fellow and former ALA and PLA president, gave a brief history of ALA’s engagement on ebook lending from 2011 to the present, starting with HarperCollins’s announcement that it would restrict library ebooks to 26 circulations. ALA responded by establishing the Digital Content Working Group to work with major publishers that year. The working group strategized on common concerns across all libraries, she said, as well as common interests between libraries and publishers. Relationship-building with publishers was important for ensuring library access to ebooks and digital content, she noted.

“We don’t have a sense at this time that other publishers are considering an embargo,” Feldman said. The group is hopeful that Macmillan will drop its embargo and is also aware and concerned about amount of Amazon content not available to libraries.

Losinski, CEO of Columbus (Ohio) Metropolitan Library System, said Sargent’s Midwinter AMA session was positive first step and that more conversation will ultimately help both sides. “We are very decentralized as a profession on this,” Losinski said. “It’s one of the reasons the change we’ve been trying to advocate has been very slow.”

Clark, deputy director of PLA and PPAO, looked at how libraries can quantify what losing access to ebooks would mean for their communities. She cited a recent study noting that 27% of public library collection expenditures now go to electronic resources, including ebooks, and another showing that 19% of adults look to library websites for book recommendations—important news for authors and publishers.

The ebooksforall.org website includes a spreadsheet and instructions for determining what your library’s author marketing efforts are worth, as well as an example of that value analysis, Clark said.

Salazar concluded by noting that ALA has created a new working group to deal with long-term ebook issues. 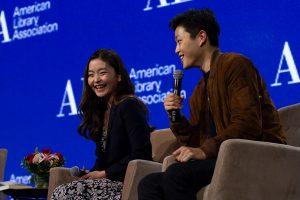 Telling Stories On and Off the Ice 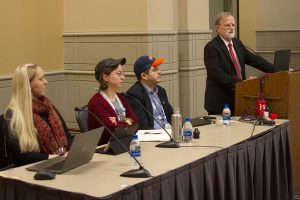