What’s Lost in a Furlough

As the US unemployment rate spikes to historic highs, many librarians and other library workers are being furloughed from their positions and navigating the personal and professional challenges that result.

One of the biggest challenges—the effect on morale—is heightened when furloughs arrive with little warning, little support, or both.

“Communication has been terrible. We are actually finding out more from the news than from our own admins,” says Cara*, an assistant at a branch library in Tennessee who was furloughed the week of March 20 along with almost all of her colleagues across her library system.

While Cara’s direct supervisor is checking in with her regularly during the furlough, she says, senior system administrators are not in contact with individual branches: “We’ve just had no support. No kind emails saying, ‘We’ll get through this.’ No checking in. My supervisor has no idea what’s going on either. I don’t like turning to the gossip mill for information.”

Cara adds that she wished her library’s board had considered the furloughs with more compassion and empathy. “I’m not saying that I needed someone to hold my hand or anything like that, but an attempt at some humanity would have helped,” she says. “Just to feel like we’re all in this together would have been nice. But we aren’t.”

Before the mid-March meeting in which Jorge*, a library director in northwest Chicago, was furloughed, his library board hadn’t mentioned the possibility to him, he says.

“It came out of nowhere,” he says. “The meeting started, my assistant and I were told to leave the room, and when we came back, we were told [my staff and I] were furloughed. I was thrown under the bus.” Jorge’s assistant, the only employee kept on payroll, was tasked with calling staff to relay the additional layoffs.

Fortunately, Jorge was able to retain his existing part-time position at a different library as well as successfully apply for unemployment benefits during the furlough. His furlough concluded at the end of May, but his challenges didn’t: He was given one week, he says, to reopen for curbside service. He says he eventually convinced the board to bring back all staff members to assist in reopening efforts. “Honestly, I can’t run a library without a staff,” he says.

While lack of communication is a common challenge for furloughed workers, it is not the case at every library. Cathrine Trautman, a children’s librarian at Detroit Public Library (DPL), says she anticipated her furlough, which began June 1.

“Our union was a big help in trying to lay out what it would look like,” she says. “They gave us ample warning, so we could prepare”—for example, by researching unemployment benefits so she was able to file for them the moment she was eligible.

“Personally, I was not shocked. I feel like anybody who gets into the public library sector is eventually going to face some type of layoff or furlough when the economy starts to take a turn downward. That’s just part of this job, and you have to be realistic about it,” she says.

That said, “it’s hard not to get discouraged, especially because I’m a first-year librarian,” she says. Trautman and her fiancé have postponed buying a house they had planned to purchase and are considering delaying their wedding.

Robb Farmer, director of Smyth County (Va.) Public Library (SCPL), has been navigating furloughs from the other side of the desk. In late March, the SCPL board furloughed most of the staff in the three libraries Farmer oversees and required him to select the workers who would remain on payroll. “That in itself was horrible,” he says. “I know in my heart that this is going to fracture us.”

Now that SCPL is nearing the end of its fiscal year, Farmer worries that he may not be able to rehire all furloughed employees. “If we lose somebody, either by cutting the position or them finding new employment, we won’t be able to bring anybody back,” he says. “We have to figure out how to reshuffle the job duties. I have to prepare for the reality of what happens after that.”

*Name changed or abridged on request 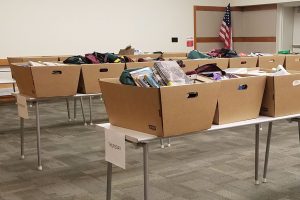 Embarking on the next great era of library services