Out of the Shadows

The statistics are disturbing: San Diego is one of the 13 highest child sex trafficking areas in the nation, according to the FBI. And the city’s sex trafficking industry—estimated at $810 million—is the second largest underground economy after the drug trade. But San Diego Public Library (SDPL) Director Misty Jones and her staff want to be part of the solution. In August 2015, SDPL launched “Out of the Shadows,” a sex trafficking awareness campaign that includes employee training, a teen mentorship program, support services, and public resources. The campaign is the first of its kind in the country. A $25,000 grant from the Rancho Santa Fe Women’s Fund, matched with funds from the San Diego Library Foundation, will help fund the campaign.

It all started with a chance encounter between an SDPL employee and a teen sleeping in a study room at the central library. Instead of admonishing the teen, which we are often inclined to do, the employee chose to talk with her to see if something else was going on. That “something else” turned out to be this: The teen had run away from home and had been lured into prostitution by a boyfriend-turned-pimp.

It’s no secret that sex trafficking has been prevalent in San Diego, but the idea that these victims were right here in the library shook us.

It was around this same time in 2015 that the library foundation approached us about a potential grant opportunity for a new program that would have an impact on the community. We knew that we wanted to address sex trafficking. This was not a typical program or service, but we couldn’t sit by and do nothing.

We talked to staff, and it became obvious that most of us who provide public services lacked the knowledge or training to identify and respond to these types of situations. So our first step was to train front-line library staff in order to increase awareness about sex trafficking, including how to identify victims and those at risk of being recruited, as well as identify predator grooming practices. We also developed reporting methods for staffers. This training was conducted with the help of Mental Health Systems, San Diego Police Department’s human trafficking division, City Human Relations Commission, and the Bilateral Safety Corridor Coalition, an alliance of more than 60 government and nonprofit agencies in the US and Latin America. To date we have trained 93% of our more than 800 staff members.

We also learned that victims are often recruited by peers in school, so we developed teen awareness training in conjunction with peer advocacy outreach efforts. We currently have 14 student advocates working in various communities.

A public awareness campaign was designed in English, Spanish, and Vietnamese and was marketed in select communities on bus stops, trolley stations, billboards, and other strategic areas.

The most important part of this program is the community outreach plan, which connects the public and at-risk youth to resources available in both the city and the north San Diego County corridor. Six branches have already started community conversations, and plans are being made for an SDPL-hosted summit on sex trafficking awareness. Library staff members are also working with libraries in Tijuana, Mexico, to promote “Out of the Shadows” across the border.

As for the teen who was found sleeping in the library, she was reunited with family, who had been looking for her. With this program, she will surely be the first of many to have her life changed for the better. 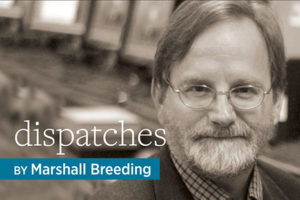 Libraries are failing to use HTTPS