On Saturday afternoon, Tor Books and the Imagineering Interest Group (IIG) of the Library and Information Technology Association brought together four esteemed science fiction and fantasy authors to discuss representations of underrepresented, LGBTQ, and gender nonbinary characters in their fiction. IIG Vice-Chair Dena Heilik kept the conversation lively with a series of provocative topics.

Nnedi Okorafor, author of the Binti series of novellas about a spacefaring African girl, said that many of her characters have gotten “angrier and more destructive” over time. Binti, however, is “not a badass,” even though she is a superhero. “Her superpower is negotiation,” Okorafor said. “Science fiction and fantasy can offer a distorted lens to view real-world issues,” she said. “Some people may believe what I’m writing is fantasy, but when I write it, I believe in it 100 percent.” Her novel Who Fears Death takes place in a postapocalyptic Sudan, where a light-skinned ethnic group oppresses darker-skinned people. “That was inspired by real events and is not escapist,” Okorafor said.

Jacqueline Carey, author of the Kushiel’s Legacy historical fantasy series, said that one of the pitfalls of creating characters with disabilities is falling prey to the “trope of miraculous healing.” In writing her newest novel Starless, Carey introduced Khai, a heroic character with a polio-like disability. “I started paying attention to novelist Nicola Griffith, who was diagnosed with multiple sclerosis,” she said. “If you retain the hardships given to a character with limited mobility, you raise their heroism.” Adding to his challenges, Khai soon learns he is actually a girl who had been raised as a boy warrior, giving him a complex nonbinary focus. Carey said her best characters are “mysterious with a capital M.”

Seanan McGuire, author of the Wayward Children series, said that just having one gay character is not always realistic. She said there is some truth to the jokes about gaydar—people of a certain sexual orientation frequently gravitate toward their peers “even though they don’t consciously know why. In fiction, we should not just be fulfilling a quota. Like wasps, we come in swarms.” Characters should be as complex as real people. “Every aspect of the human experience,” she said, can be folded into one personality. “Why not have a Latino lesbian who uses a wheelchair? I know one!”

Sherrilyn Kenyon, author of the Dark-Hunter Universe series, said her characters are “defined by their inconsistencies.” In some cases, “I had to wait for my publisher to change” in order to avoid some stereotypes, Kenyon said. “I fight with my editor a whole lot less now.” Books should be an “alternative safe place,” she added. “I try to make mine a voice for the voiceless, by showing kids you don’t have to be what people tell you to be.” 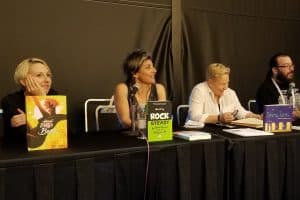 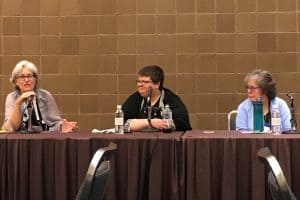 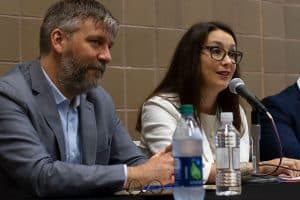