Ten Reasons Libraries Are Still Better Than the Internet

“Thanks to the internet, we no longer need libraries or librarians.” You most likely hear some variation on that theme pretty regularly.

Sixteen years ago, American Libraries published Mark Y. Herring’s essay “Ten Reasons Why the Internet Is No Substitute for a Library” (April 2001). Technology has improved exponentially since then—social media didn’t even exist yet. But even the smartest phone’s intelligence is limited by paywalls, Twitter trolls, fake news, and other hazards of online life. Here are 10 reasons why libraries are still better than the internet.

Libraries continue to provide benefits that are both tangible—such as community spaces and human interaction—and harder to quantify—access, privacy, intellectual freedom. The internet is an indispensable and irreplaceable tool for modern living. But it is not a library and will not replace the work of librarians. 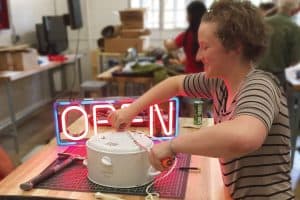 Libraries and the Art of Everything Maintenance