In the library-job search, some face special barriers

Ayoola White’s first name rhymes with “Crayola”—a fact she communicates through her email signature, her Twitter handle, and even her business cards.

Still, the Simmons College student worries that after she graduates in December with dual masters’ degrees in library science and history, her name, which is of Nigerian origin, will hamper her search for an academic library position.

“My first name is something that most people in the United States would not be familiar with,” White says. “There have been studies showing that if you have a name the interviewer or search committee doesn’t think they can easily pronounce, they are less likely to move forward with your application, even if you have the same or similar credentials as someone else.” In one of those studies, job-seekers whose names sounded Middle Eastern or Chinese had to submit 64%–68% more applications to get the same number of interview requests as candidates whose names sounded white. In another, resumes bearing white-sounding names received 50% more interview requests than resumes with names that sounded African American.

In addition, White is partnered with a woman, and worries “about navigating the job search as somebody who wants to be able to move somewhere with my partner.” Some of the job ads she comes across specify that they don’t discriminate on the basis of sexual orientation, but others don’t.

White’s concerns represent only some of the potential obstacles that people from underrepresented demographic groups face when applying for positions in the library field—a field that remains about 86% white and 97% able-bodied (per the 2017 ALA Demographic Survey, which did not ask about sexual orientation.)

Because the library profession has been trying to diversify itself for a long time—particularly racially, and particularly through initiatives such as diversity task forces and diversity fellowships—some may be surprised that people from underrepresented communities still encounter barriers to library employment.

Theresa S. Byrd isn’t. “We have failed miserably at diversifying the profession,” says Byrd, dean of the University of San Diego’s Helen K. and James S. Copley Library. “There’s just no other way to say it.” 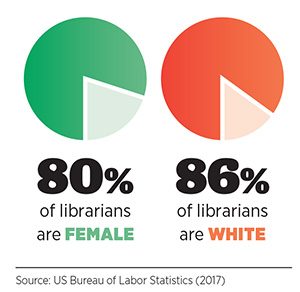 From the program’s inception, “it was very obvious that we had to have white librarians serve as mentors, because there were not enough people of color (POC) to serve in those roles,” Byrd says. “The question I’d always get asked was, ‘I’m white. Can I do this?’ The answer is: ‘Well, who else, if not you? We don’t have enough minority leaders to go around.’”

Second, she adds, the culture of many libraries is unwelcoming to employees of color, often because if there is a POC on staff, there’s usually only one. In Byrd’s experience, this is particularly true at academic libraries.

“The obvious solution is, hire more than one [POC],” she says. “At least hire a few, so that people aren’t alone.” Failing that, “there may be other people of color on campus, so introduce them to those people when they come for an interview. What could help them find a community that would give them support, even if they feel some otherness at work?”

Third, in Byrd’s view, the fellowships designed to bring more candidates of color into the workplace have failed.

“I’m so sick of those,” she says. “You’re putting a target on someone’s back: ‘You’re the diversity fellow.’ It says: ‘You’re not really part of the organization. We’ll keep you for three years.’ What I don’t understand is, why can’t you just recruit and hire people into these jobs, rather than have these revolving doors? I don’t know that people in the organization take them [diversity fellows] that seriously, because they know many of them are going to be gone. I think it’s a way for predominantly white institutions (PWIs) to say, ‘Look how great we are. We’re helping people.’ No, you aren’t. If you really want to help a POC, just give them a job through the regular process.”

She says, too, that even when POC are hired on a permanent basis, it’s often into access services in a liaison area. “They hire people as the black studies librarian or the Latino studies librarian,” she says. “Well, they’re not in the mainstream part of the organization. But that does allow the organization to put a checkmark, when they have to turn in reports, about how diverse their staff is. They’re using POC for statistical reports.”

That said, “the good thing about diversity fellowships is that they tend to give you a lot of experience,” she adds. “And I do know people who have had a good experience [in them]. But it’s difficult to know ahead of time how it’s going to be.”

People with disabilities face numerous obstacles to employment in the library sector as well.

Kat [last name redacted], a recent library school graduate and a nonbinary queer Tejanx who uses the pronouns they/them/theirs, was diagnosed with juvenile rheumatoid arthritis at age 18 months and also lives with fibromyalgia, chronic migraines, and anxiety. Even before graduating, they encountered barriers to professional success, they say.

“I didn’t get a lot of career guidance from my university,” Kat says. “As an online student, I wasn’t on campus, and being disabled, I wasn’t able to drive 40 miles to campus and do things in person. It was easy to ignore me, because they knew this person wasn’t going to be at their office door.”

During Kat’s recent job search, they decided on a case-by-case basis whether to disclose their disabilities. “If, during the process, it felt like at least like the employer was trying to point toward inclusivity, then I might [disclose],” they say. “If that didn’t seem like it was happening, then I didn’t.”

And then there were the interviews to navigate. “A lot of times [disability] came up naturally whether I intended it to or not,” they say. “Because I’ve been disabled my whole life, it’s hard for it not to. I always worried that people would include it in their assessment of me as a candidate, consciously or not.”

Sarah Bauer*, a librarian who recently began working at a liberal arts college on the East Coast, experienced the same concern during her last job search. Bauer has diabetes as well as chronic back pain, anxiety, and depression. The medicine she takes for diabetes sometimes requires urgent trips to the bathroom, while fluctuating blood sugar can require her to eat outside of meal times.

Though these accommodations might not seem particularly onerous, Bauer has worried during job searches that if she’s perceived as having too many special needs, “it’s going to be too much trouble to hire me,” she says. “They’ll think, ‘This other person’s just as good, and they’re going to be easier to deal with.’ You can’t always control your unconscious discriminations: ‘I can’t quite put my finger on it, but we just liked X better.’ And the reason they liked X better is that I’m Y, and I have issues.”

Rather than disclosing her health conditions to her future employer, Bauer targeted her search to academic libraries, where “I knew I would have my own office, and I could have snacks in here, and if I needed to leave the room to inject insulin, I had some leeway to do that,” she says. “People in other library environments are not necessarily going to have those benefits. If you’re the only one on the desk, you’re usually not allowed to leave to go to the bathroom. You have to call somebody and hope that they get there quickly.”

To disclose or not

Lesbian, gay, bisexual, transgender, questioning, queer, intersex, and asexual job candidates must also decide what and how much to reveal about themselves. 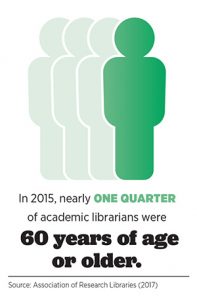 Kat generally does not disclose their nonbinary identity during job searches. “You don’t want to believe that that will alter someone’s impression of you, but it very well could,” they say. “If it doesn’t feel like a comfortable enough environment for me to [disclose], I’m not going to at this point, because I really need a job. I would imagine in the future, when I already have a position and income and health insurance, I think I would be more upfront about it, to be sure that the place I end up working is going to respect that. But at this juncture, no, unless it feels okay.”

Like White, Kat pays careful attention to the wording of job advertisements and applications when determining what and how much to reveal. One big tell: How a job application treats the question of gender.

“If the options are ‘male’ and ‘female,’ that’s not a great feeling,” Kat says. “If it’s ‘male,’ ‘female,’ or ‘other,’ it’s weird that ‘other’ feels good, but at least they’re letting me say, ‘not one of these two.’ Or maybe they let you fill it in, and that’s really cool, because at least they’re not saying, ‘We know all the [gender] options and are going to list them here.’”

Institutional communication around gender is also a major tell for Bauer, who is bisexual and genderqueer. Though she’s out to only some of her colleagues, learning that her new job had all-gender restrooms made her think, “Oh, I might actually fit in here,” she remembers.

Kat recently had a similarly hopeful experience with a potential employer whose job posting seemed especially welcoming. “The language of the job posting felt really inclusive,” they remember. But what they really appreciated: The hiring director, who did not know about Kat’s mental health issues, supplied the interview questions over email ahead of time.

“For somebody with anxiety, that was huge,” Kat says happily. “It made a world of difference.” 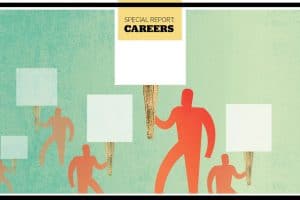